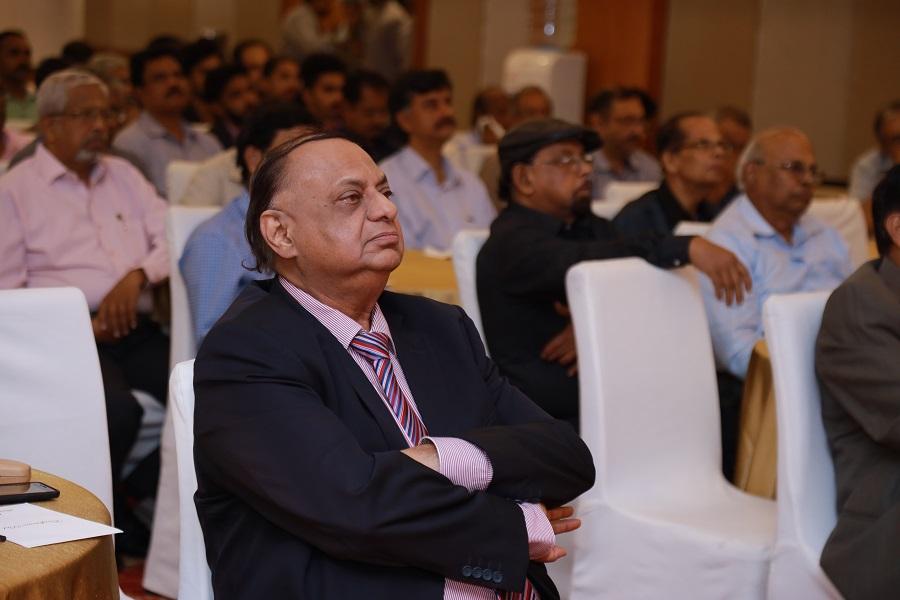 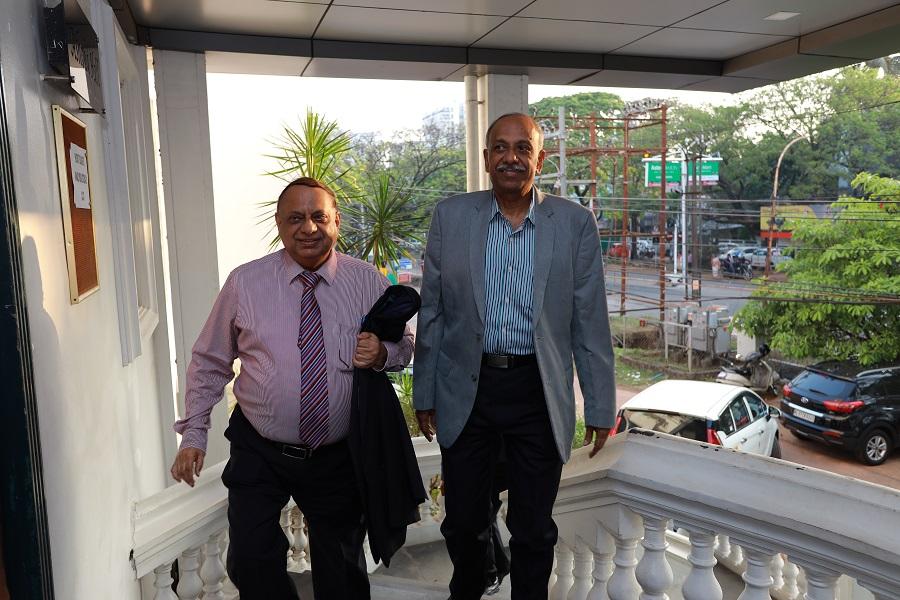 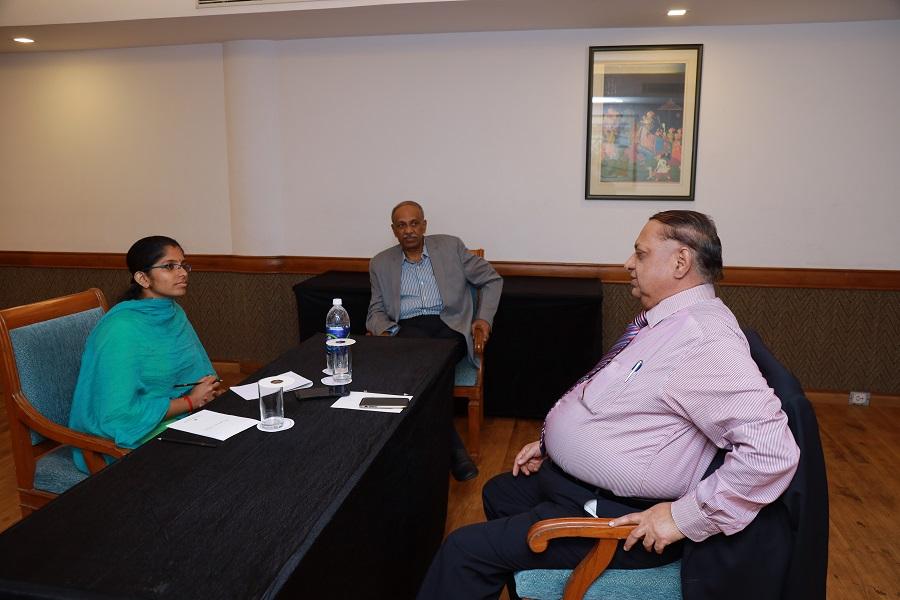 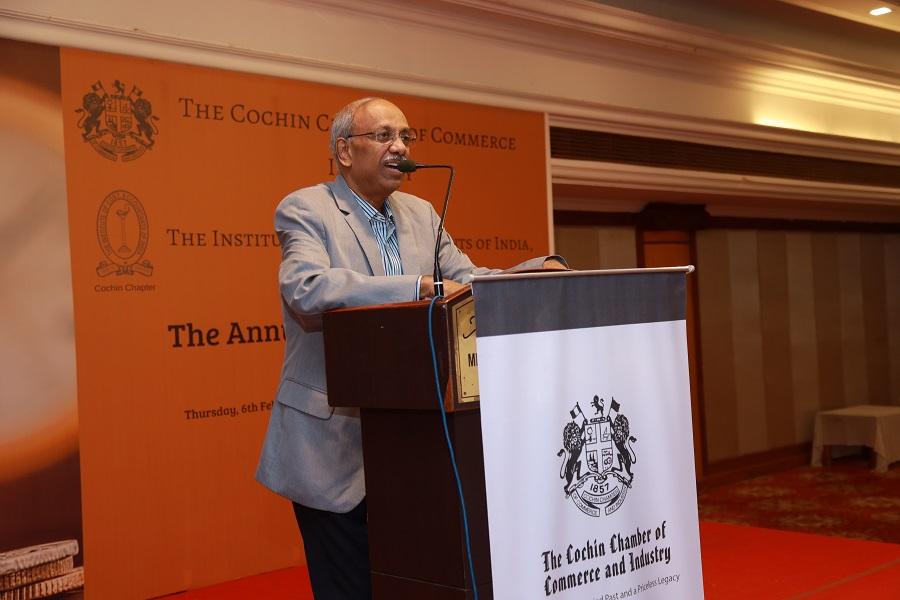 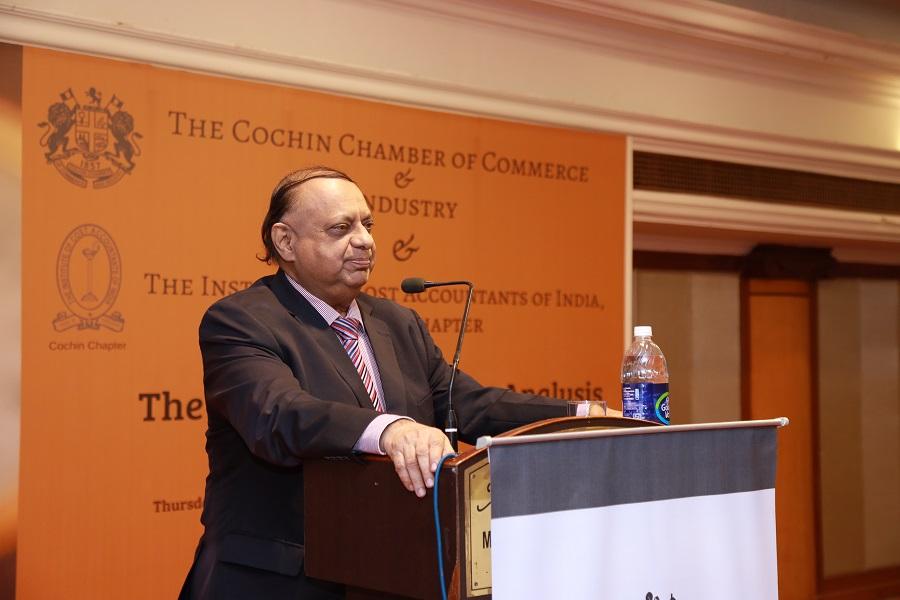 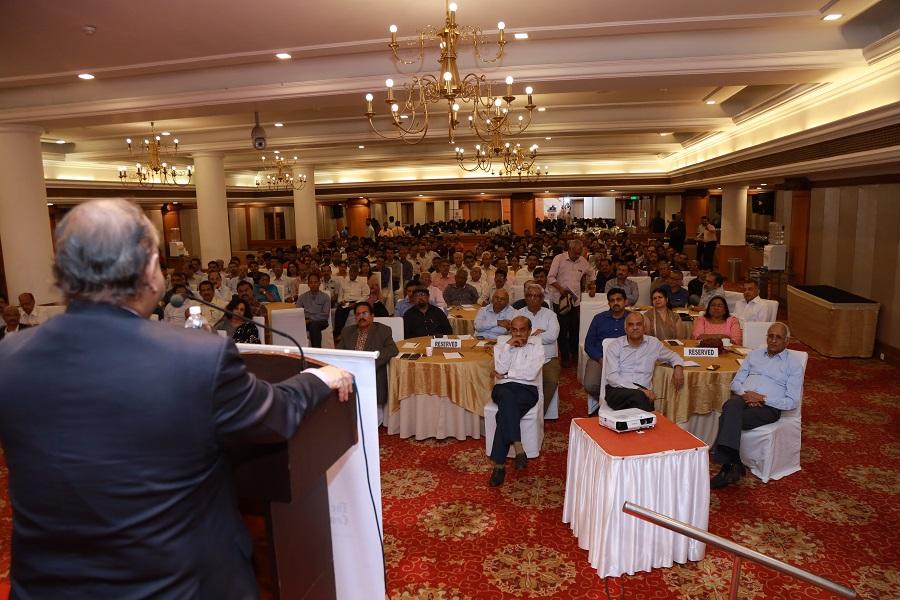 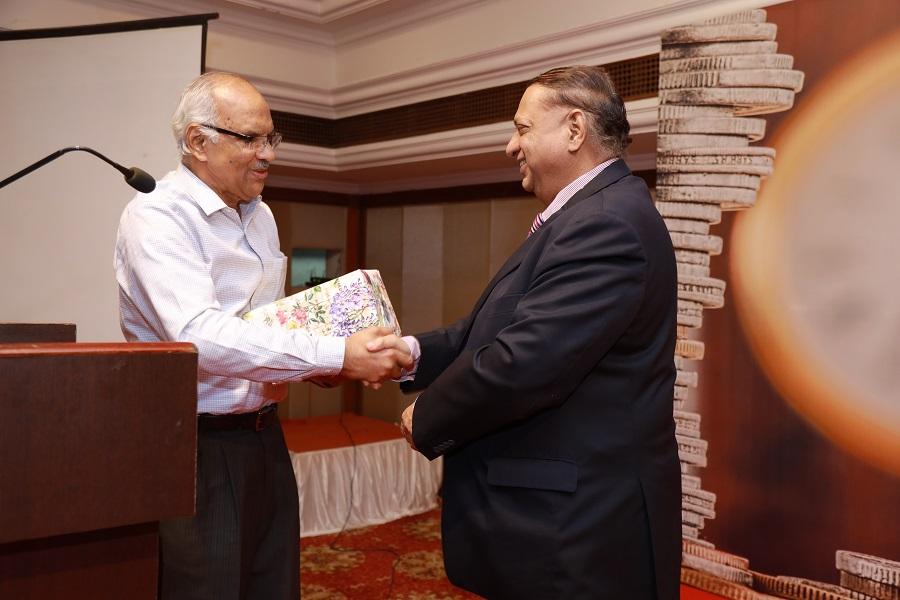 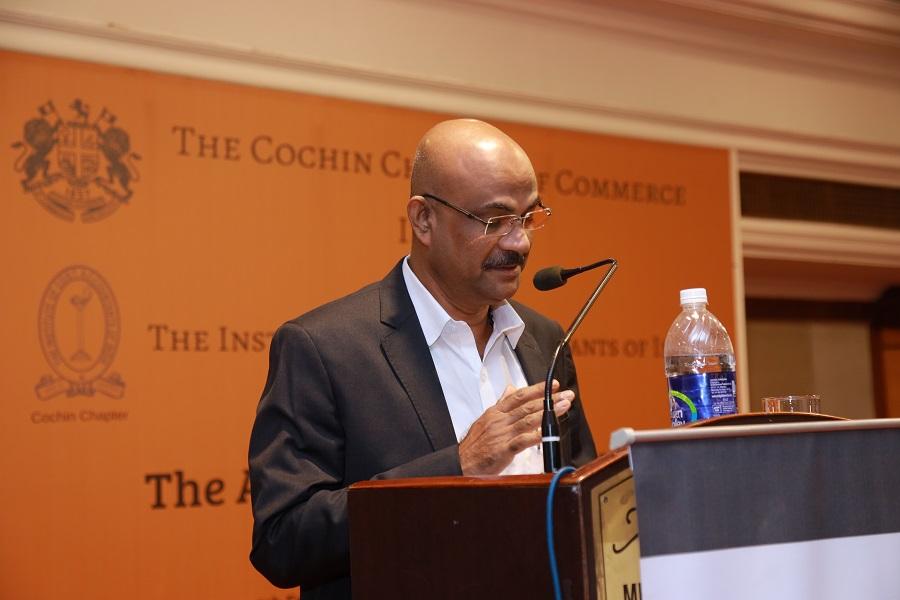 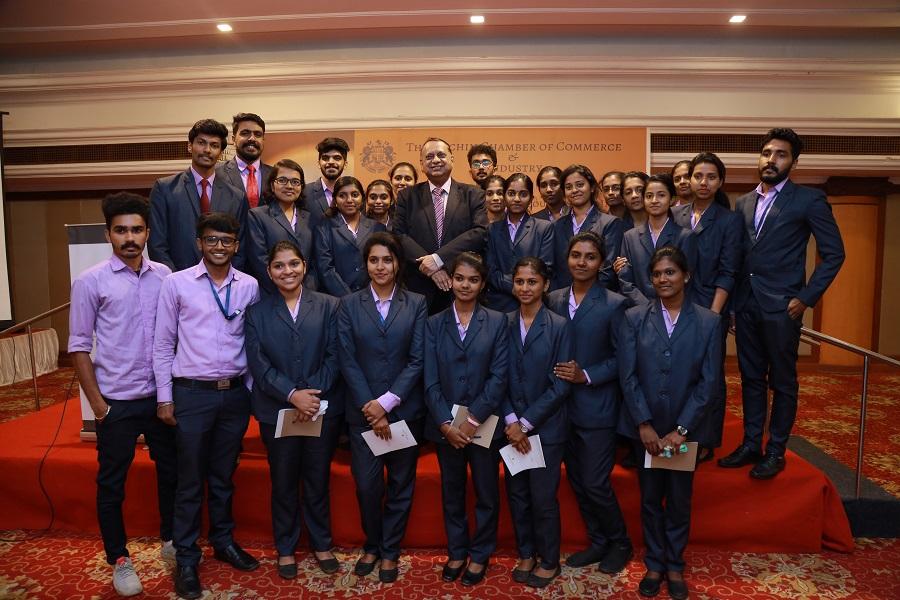 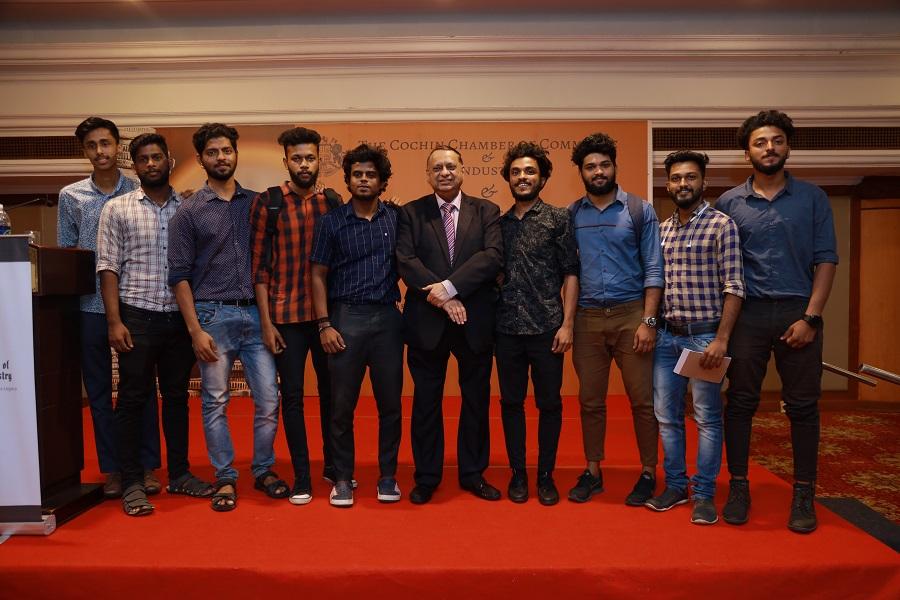 The Lecture was delivered by Mr. Homi P. Ranina, eminent Lawyer and Tax Expert from Mumbai.

Mr. Venugopal C. Govind, Past President of the Chamber gave away a Memento to Mr. Ranina.

Gist of the speech delivered by Mr. H. P. Ranina, noted tax expert, under the auspices of the Cochin Chamber of Commerce on 6th February 2020 on "Union Budget 2020-21"

This year’s Budget proposals have been formulated in the background of a difficult international environment, moderating growth scenario and decelerating exports. The strong linkage with international markets has imposed serious constraints on the calibration of domestic macro-economic policy instruments. Expectations from this Budget were running high in view of three disturbing trends in the economy-

·         steep fall in the rate of investments, particularly by the private sector;

Attempts to decouple the Indian economy from the international environment have not succeeded, and will not. The recessionary environment globally has squeezed export demand. In this background, it has been necessary to continue austerity measures to check the fiscal deficit which has been ably done by the Finance Minister.

The fiscal deficit for 2019-20 is estimated at 3.8 % of the GDP, breaching the mandate of the Fiscal Responsibility and Budget Management Act. The next year’s deficit is projected to be 3.5% of the GDP which is estimated to be Rs. 7,96,337. However, it is doubtful whether this reduction will be accomplished next year. There is a build-up of large off-budget liabilities through food, fertilizer and oil sector subsidies.

Growth in government spending has fallen in 2019 and remains skewed towards revenue expenditure. The tax buoyancy is set to decline and remain flat in 2020-21. Public debt remains stubbornly high and the interest burden for this fiscal year will Rs.7,08,203. Defence spending, interest payments and transfer to State governments account for 60% of the total expenditure of the Central Government. With significant increase in spending on infrastructure projects, the 2020 Budget proposals will give the firepower to reignite the economy.

The corporate sector has been left untouched, apart from the reduction in tax rates announced in September, 2019; there is no reduction in surcharge as was generally expected. The only benefit given to the corporate sector is the removal of the dividend distribution tax.  Hence, companies from the financial year 2020-21 will declare a higher amount of dividend for shareholders and pass on the benefit of abolition of the dividend distribution tax.  This is expected to give a boost to share prices when financial results are declared from May this year.

Shareholders will also stand to gain.  Foreign investors will be able to claim credit for the tax which is paid in India; under section 194, tax will be deducted at source when dividends are paid.  In order to remove the cascading effect, a holding company will get deduction of the dividend received from its subsidiary, so that the holding company does not again have to pay tax on the dividend received from the subsidiary.

The shareholder or unit holder receiving dividends from companies or mutual funds will also stand to gain if he has borrowed money to buy the shares or units, because he will be entitled to claim a deduction of the interest paid on the money borrowed under section 57 of the Income-tax Act.  However, the deduction of interest will be limited to 20% of the amount of dividend from shares or income from units.

The new tax regime applicable from 1st April, 2020 is optional.  The reason is that the lower tax rates will apply only if the tax payer does not claim any deductions from his taxable income.  Such person can continue to be governed by the existing tax structure if he wishes to continue claiming the deductions and exemptions.  Therefore, those who are availing of the standard deduction from salary, exemption of certain allowances, or claiming deduction under section 80-C for certain investments like in provident fund, bank deposits, etc. may find it beneficial to pay tax under the existing scheme rather than opt for the new tax regime.

In short, the new tax regime will be beneficial for senior citizens and others who in any case are not claiming the deductions and exemptions which are available to salaried employees.  Even businessmen who do not claim deductions, where they have not made any investments qualifying under section 80-C, would find the new tax regime attractive.  To illustrate, if a person earning Rs.15 lakhs in a financial year and not eligible to claim any deductions will get a tax advantage of Rs.78,000 if he opts for the new scheme.

Non-resident Indians will be liable to pay tax in India on their foreign income if they spend more than 120 days in India during a financial year.  They will continue to get exemption from Indian taxes in respect of income earned outside India so long as they are residents of a foreign country.  Only those Indian citizens, who are not residents of any foreign country, would be deemed to be resident in India and would be liable to tax on their world income.  This proposed change is in conformity with recent international trends.  Persons in the Gulf who are resident in those countries will not be liable to tax in India because technically they are liable to tax under the laws of those countries though tax is not payable by them in view of exemptions granted.

If a resident Indian remits an amount of Rs.7 lakhs or more from the next financial year for any purpose under the liberalized remittance scheme, tax will be collected at source at the rate of 5% by the bank remitting the funds. However, he will get credit for such tax from his taxable income  The main purpose of this amendment is to gather information pertaining to persons who have remitted the funds and track the income earned thereon.

Start-ups in India will be entitled to the 100% tax exemption for three out of the initial ten years even if their turnover reaches Rs.100 crore as against Rs.25 crore at present. Taxability of Employees’ Stock Option Plans is sought to be rationalized by making the perquisite liable to tax only in the year in which the employee resigns from his company or sells his shares, or within five years of exercising his option.

Assessments and appeals will now be conducted in a faceless manner so that the scope for corruption is eliminated as the tax payer will not know which officer of the tax department is handling his assessment or appeal proceedings.  A Tax Payer’s Charter is to be introduced to set out the rights and duties of tax payers as well as tax officers.

A voluntary compliance scheme is proposed to be introduced which is meant for reducing direct tax litigation.  Tax payers in whose case appeals are pending at any level would be eligible to take benefit of the scheme which would require them to pay only the amount of the disputed tax.  If this is done by 31st March, 2020, there would be complete waiver of interest and penalty.  If the payment is made by 30th June, 2020, an additional amount of 10% of the disputed tax would need to be paid.  Where the pending litigation is for disputed penalty or interest, the tax payer would be required to pay only 25% of the same by 31st March, 2020 for settling the dispute, or 30% of such disputed penalty if payment is made by 30th June, 2020.

This budget removes structural bottlenecks which have been hampering investments.  It has given the right focus on moving towards the new world economy based on innovations in the fields of artificial intelligence, data storage, quantum computing, 3-D printing and internet-of-Things.  It has laid the foundation for setting up data centre parks throughout the country.  For the first time, the budget proposals have given an impetus to knowledge driven enterprises and intellectual property creation.  Knowledge translation clusters will be set up across different technology sectors, giving emphasis to quantum technology which is opening up new frontiers in computing, communications and cyber security.

The budget proposals should stimulate demand and raise the level of capital formation which has fallen by 6 percentage points over the last eight years. If the expenditure programmes are put through with dedication and commitment, it will have the desired result of putting India on the growth path.  India is on the brink of entering into the league of developed nations. Setting up of world class infrastructure by 2023 will help the country to leapfrog to a higher growth trajectory. Apart from triggering a higher rate of growth, this Budget is meant to propel India into the New World economy which will put the country in the top three amongst the developed nations by 2030.